Last week, I decided to make some necklaces at playgroup, using my large collection of toilet rolls. We have a large age-range at Playgroup, so threading with beads/pasta is not really an option with babies around.

First, I painted them, by rolling them over a sponge filled with paint. 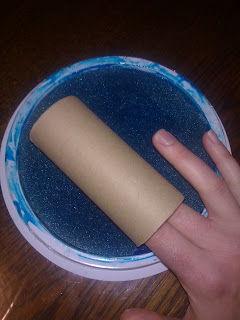 I left them to dry. 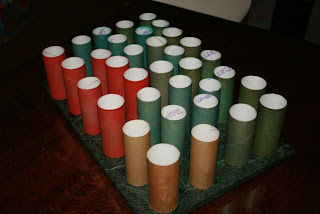 Then, I cut them into thirds. 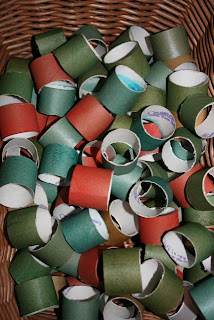 The kids threaded them onto wool to make necklaces. 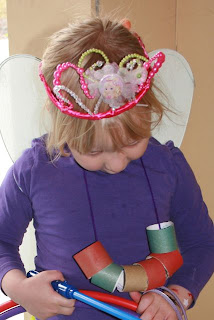 Email ThisBlogThis!Share to TwitterShare to FacebookShare to Pinterest
Labels: craft

Taking the Little Lohs to a restaurant

Tonight we went out for dinner with my Dad and step-mum to a local Vietnamese restaurant. We used to be regulars there (pre-kids), but go much less frequently now. I was a bit unsure about how the kids would behave - they were both tired and we don't take them to restaurants very often. But, the evening went really well! The boys were great - they ate heaps of fried rice, charmed their grandparents and generally were very pleasant.

So, my tips for wrangling little kids in a restaurant:
1. Take a portable high-chair (restaurant ones can be gross & don't always have a tray, which makes it difficult for toddlers to feed themselves).
2. Ask for a table near the fish-tank (or mirror, or anything else of interest to kids). It can be a welcome diversion if kids get restless.
3. Take activities to do at the table while waiting for food to arrive (Mr Fun "typed" on an old keyboard on his highchair, Mr Sociable put stickers into his Tonka Truck book).
4. Order something for the kids as soon as you arrive. The adults took a while to choose what to order tonight, but I ordered some fried rice for the kids. They were happily eating while the adults waited for their food.
5. Take PJs in the car that the kids can get changed into after dinner - then they are ready to put straight into bed when you get home (handy if they fall asleep in the car!).

What are your tips for kids in restaurants?
Posted by Erin at 20:36 0 comments

Email ThisBlogThis!Share to TwitterShare to FacebookShare to Pinterest
Labels: food, out and about

Mr Sociable and I both love flowers. We grow a few in our garden and we always enjoy looking at other people's gardens when we go for a walk. A month or so ago, I suggested that we should collect some flowers to make a birthday card for one of his friends. We went for a long walk, and collected lots of different types of flowers (we even picked some weeds - dandelions & clover flowers!) 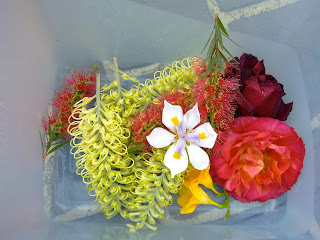 We laid out the flowers on paper, in an old flower press I have from when I was little.


After a few weeks, we had a look at our flowers. Some of the flowers looked great (eg. the lavender, clover, dandelions). Others went a bit mouldy (eg. the roses and grevilleas). I did some research after the fact & apparently I should have used more absorbent (blotting) paper & also changed the paper regularly. Live and learn! 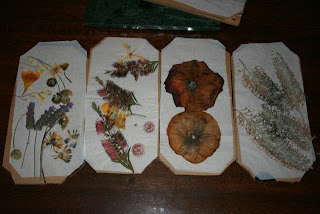 Anyway, Mr Sociable was pretty happy with the finished result and we made a card for his friend's birthday. She loved it!

* For those who don't recognise the reference in the title, it's a Wiggles song.
Posted by Erin at 19:21 0 comments

I want to share a funny conversation we had while driving to swimming this morning. 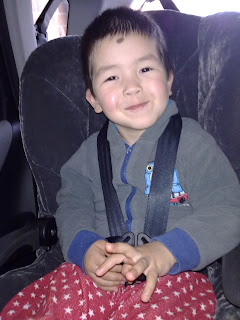 A long conversation followed about safety & reaching the pedals (he was convinced that he could make a tower out of ice that would help him to reach the pedals). I reasoned with him that he doesn't know how to drive - he is convinced that he does! I love his confidence - that he thinks that the only thing stopping him from driving is the police!!
Posted by Erin at 13:48 0 comments

Loved watching the bubbas vying for the favourite toy!

We're going on a puddle hunt...

Today, we went to visit a friend of mine. It was raining. As we were getting back into the car (in the rain), Mr Sociable thought it would be a good time to play in the puddles. I didn't! I was getting wet while trying to get the kids into the car. So, I put him into the car & promised him that we could go on a puddle hunt in the afternoon (with raincoats and gumboots).

I also wore gumboots and a raincoat. We looked a sight when we arrived home - very soggy! So sad that the photo my Mum took didn't work out ;)
Posted by Erin at 20:01 0 comments

Email ThisBlogThis!Share to TwitterShare to FacebookShare to Pinterest
Labels: out and about, play ideas

Mr Fun is one

Mr Fun is ONE*! This year has gone by so quickly! It doesn't seem that long ago that he was a helpless newborn, sleeping in my arms and smelling like milk. Now he is an adventurer - getting in mischief, exploring new things, climbing stairs, eating "interesting" things from the garden, saying a few words and rumbling with his brother.

On his birthday, we had a banana bread breakfast and went to playgroup.

The next day we had a party at our house, with some of our extended family.

My sister made a delicious cake, shaped like a drum - one of Mr Fun's favourite things! 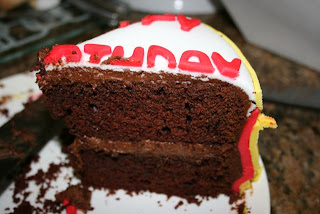 I love getting lots of pics of family at events like this. So here are a few...

*He actually turned one at the beginning of September, but I've been waiting on a few photos before blogging about this.
Posted by Erin at 15:42 0 comments

When I read the chicken nugget recipe in Deceptively Delicious, I was skeptical. The instructions are to mix pureed vegie (sweet potato, spinach or beet) with egg, roll the chicken in it and crumb. I felt pretty sure the vegie/crumb coating would just fall off. I also wasn't too keen on shallow-frying, as the recipe suggests.

Casting doubts aside, I gave it a go, with major variations to the original recipe. I baked, rather than fried. I omitted lots of the seasoning (including salt) & instead just squeezed some lemon juice over them at the end (but left Mr Fun's plain). I had mixed results, mainly due to the positioning in the oven (the ones closer to the element crisped up better and the coating was firmer). But, my family all gave them the thumbs-up (and Mr Sociable didn't even notice the greenish tinge). 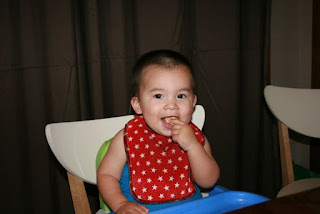 Puree the raw zucchini in the food processor. Add the egg and whizz together. Dip the chicken into the zucchini/egg puree. 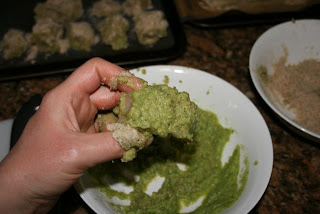 Put the zucchini-coated chicken into a bowl of breadcrumbs. 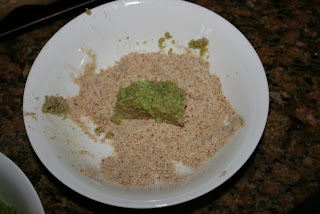 Pile the breadcrumbs on. Pick up the nuggest and very gently shake the nugget to remove excess breadcrumbs. 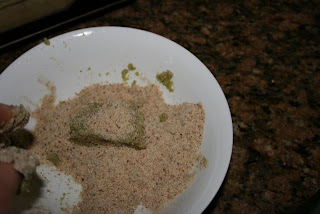 Place the nuggets on a tray. 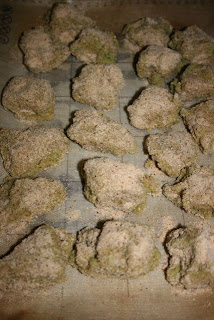 Cook in a moderate oven until golden, turning once. Cut one of the nuggets in half to check if they are cooked through. Serve with a squeeze of lemon. 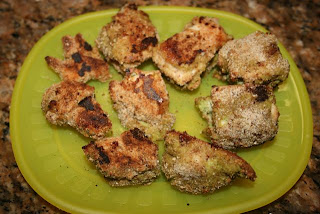 I actually made these in advance (before going to pick up Mr Sociable from preschool). I left the raw nuggets covered in fridge & just put them in the oven when we got home. Easy & delicious! :) I will definitely try these again - I'll watch the position in the oven a little more closely next time.
Posted by Erin at 19:52 0 comments