It was a warm morning, I thought it would be fun for the boys to have a morning "tea party" outside. 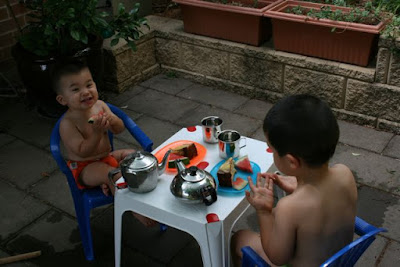 Apparently not. Neither of the boys would eat my delicious cake (butter cake with lemon butter filling & icing). 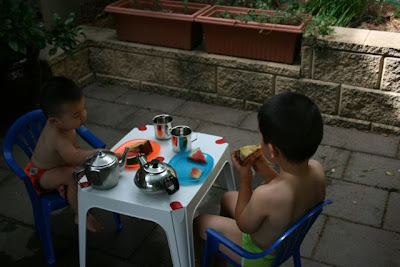 Mr Fun just wanted to tip the water out of the cups and the teapots - all over himself and the table. Mr Sociable left the party after receiving 2 mozzie bites. Tea party FAIL.

Have you ever done an activity you thought would be really fun but it just fell flat?

Linking up with My Little Drummer Boys for Wordless Wednesday.
Posted by Erin at 23:40 0 comments

To my morning cup of coffee: 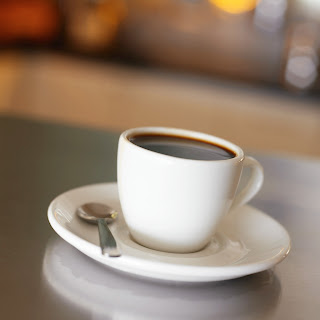 But today I have missed you. Today, when I face the consequences of staying up too late last night and being woken far too early this morning by my precious boys. Today, when I struggle to be nice and my early-rising boys are likewise grumpy. Today, when the hours creep by slowly and just want to go hide in my room until Franky gets home. Today I miss you.


Linking up with Jess @ Diary of a SAHM

Email ThisBlogThis!Share to TwitterShare to FacebookShare to Pinterest
Labels: family life, food, me

I've been reading: The Christ Files

Since having kids, my reading habits have totally changed. It takes me so much longer to finish books, because it's much harder to multi-task while reading a book! I used to read mostly fiction, whereas now I mainly read non-fiction.

Recently, I've been reading The Christ Files (John Dickson, 2006). It's a short book (101 pages), so I've actually finished it in a couple of weeks! It's a book aimed at people who are interested in the history of Jesus - how do historians learn about Jesus and the context he lived in? It is not written just for Christians, but is aimed at anyone who is interested in the historical basis of Christianity.

I studied Ancient History as uni (actually, it was one of my majors), but it has all faded into a distant memory. I've enjoyed this book, as it reminded me about how the methods of history can be applied to Jesus. It was faith-building to read the historical facts about Jesus that can be agreed upon by scholars. Dickson explains the range of historical evidence that informs us about Jesus, such as ancient Jewish & Graeco-Roman historians, archaeology and the Christian gospel accounts. He details some of the historical facts we can (and cannot) learn from these sources.

This book is a helpful (and approachable) read for anyone who wants to find out more about the historical evidence for Jesus and the way that historians arrive at their conclusions. Dickson doesn't write like he is trying to "sell" Christianity, but is honest about the limitations of history:


"In what follows I intend to keep within the bounds not only of the historically 'possible', but also the truly plausible. 'Certainty', by the way, cannot really be achieved in the study of history. Virtually nothing about the past can be proven in the mathematical sense. Historical evidence allows us to talk about probabilities rather than certainties. In many ways, it is like legal evidence. 'Beyond reasonable doubt' does not mean certain; it means that a particular conclusion is so well supported by the evidence that to doubt it, or to insist on an alternative explanation, is unreasonable...
At times my approach in this book will mean I have to be circumspect about things I actually believe to be true. For instance, when I mention Jesus' reported miracles, readers will notice that I make no attempt to prove Jesus did in fact heal the sick, restore sight to the blind and so on. This is not because I do not accept these things; it is simply because I think historical sources are incapable of proving (or disproving) things like healings." (pp. 14-15)